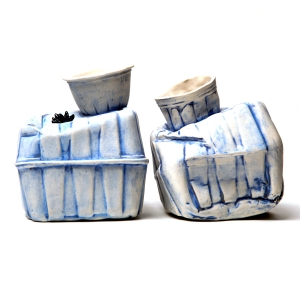 In this show, most of the forms are press-molded from plastic waste including cake boxes and soft drink bottles. The purpose is to give trash a rebirth through the artistic process. While the usefulness and function of the mass-produced product has ceased, its form has been transformed into a more permanent vessel with individual character.

Many of the pieces are cast from crushed trash. Other forms are created, crushed, and finally rebuilt. The process is intended to show the real fate of trash while also being a metaphor for life. In these pieces, I am questioning how we see misfortune in life. Human beings are often afraid of failure and being crushed; however, damage and pain can sometimes create character. Through the creation process, I remind myself again and again, “It is OK to throw the form on the ground and rebuild it.”

Concerning the images, I mimic traditional Chinese flower-animal paintings using a graphic novel style. The chicken images in my works are from the paintings of Qi Bai-Shi (1864-1957). His vivid animal images have a sense of childlike naïveté that strongly resonates with me. The animal imagery on the surface is not only naturally philozoic (love of animals), but it is also a vehicle to express wisdom that is intuitive as well as communication that transcends human language.

The title of the exhibition, High Trash, reflects the paradox of the intermingling of opposites in my work: Classical Chinese painting vs. graphic novel imagery; mass-produced commercial design vs. one-of-a-kind, hand-made ceramic vessels. In short, with these works, trash is no longer trash, and what was once low has now been raised up.