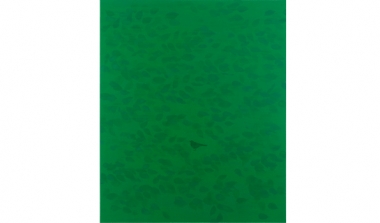 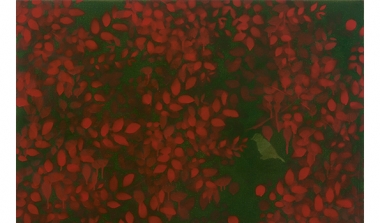 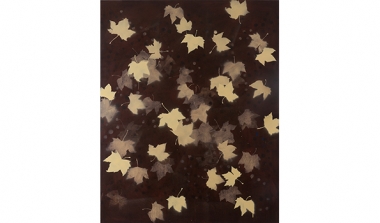 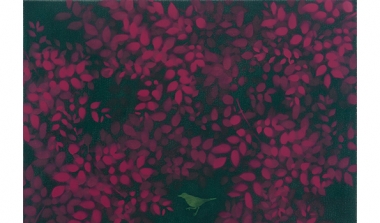 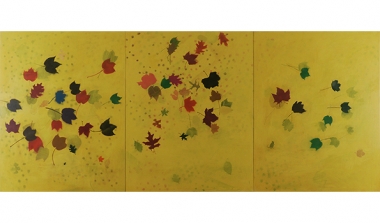 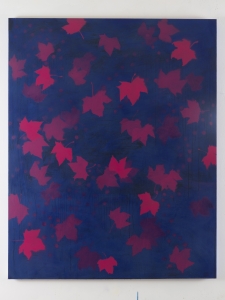 All The Ways In Which I Abuse Her *Extended Through 11/10*
New Paintings by Ting Yih
October 7 - November 10, 2016
Exhibition Statement

All The Ways In Which I Abuse Her

In the 12th century Sufi poem The Conference of the Birds, a group of birds decide they need a king - which in Sufism means to seek God or truth. Upon realizing how difficult the journey will be, the birds grieve and whine and find excuses for not going on the journey.
Birds represent the intermediaries between heaven and earth. We don’t know where they come from and we don’t know where they go. They catch our attention with their fluttering of wings and the flexing of branches and leaves, as they touch down or lift off. We see them from the corner of our eye, and we may turn and observe them for a bit. If we are birders we pull out the binoculars and study them. Each one is unique. They come alone or in flocks. They may linger a while and sing. When the temperature begins to drop and leaves turn color, some of these otherworldly creatures disappear.

Unlike birds, the leaves do not disappear. They do however change. The decay of autumn leaves reminds us of our own aging process and the passing of youth while spring leaves bring life again after the long bare winter. The magic of their revival brings to mind the belief in reincarnation, the continuing cycle of life, death and rebirth.

Another meaning of leaves is concealment. Leaves shield us. Children hide in a pile of leaves; Adam and Eve cover themselves with them. Homeowners plant shrubs to shield their property from neighbors; military uniforms are camouflaged with leaves. Birds, listlessly hopping from one tree branch to another, shelter in the leaves.
Then there is the wind. If birds are the intermediary between heaven and earth, wind represents the spirits. Wind blowing through leafy trees, or the gushing that lifts fallen leaves aloft are signs of invisible spirits passing through. Non-human animals acknowledge their presence, hear their siren message.

In tarot cards, dead birds represent freedom and renewal. But if birds are the intermediary and the messenger, what does it mean when the bird dies? That, perhaps, there is a problem in paradise. These are the haunting images that are in my head: a bird in a tree, leaves fluttering in the air, gusts of wind, spiders, mice and butterflies. Is nature sending as a message?

Climate change and human’s direct role in it demands that we ask what is our relationship to Nature. Marcus Aurelius, trampling through Northern Europe to fight off invaders, wrote the passage I adapted as the title for a painting and the show.

I travel on by nature’s path until I fall and find rest, breathing my last into that air from which I drew my daily breath, and falling on that earth which gave my father his seed, my mother her blood, my nurse her milk; the earth which for so many years has fed and watered me day by day; the earth which bears my tread and all the ways in which I abuse her.
Marcus Aurelius, Meditations, Book 5, Section 4

Those birds from The Conference eventually did embark to seek their God and after great difficulty they found Him. It turned out that God was simply a reflective image of themselves.