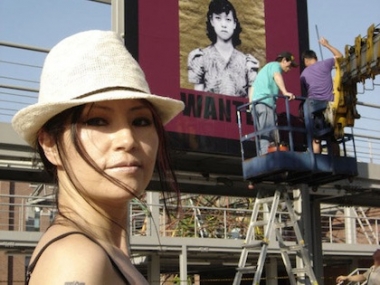 Chang-Jin Lee is a Korean-born visual artist and lives in New York City. Her multicultural background and experiences have provoked in her an interest in investigating the diverse cultural and social issues in our current era. In her artworks, she deals with identity, gender, globalism, nationalism, human trafficking, and religion.

Since 2007 she has been working on artwork investigating the forgotten history of WWII era Japanese military sex slaves or “comfort women.” Supported by The New York State Council on the Arts, The Asian Cultural Council (2008), The Asian Women Giving Circle, The Lower Manhattan Cultural Council, and The New York Foundation for the Arts, she has traveled to 7 different countries throughout Asia to interview Korean, Chinese, Taiwanese, Indonesian, Filipino, and Dutch “comfort women” survivors, as well as a former Japanese soldier.

COMFORT WOMEN WANTED brings to light the memory of 200,000 young women, referred to as “Comfort Women,” who were systematically exploited as sex slaves to serve the Imperial Japanese Army in Asia during World War II, and increases awareness of sexual violence against women during wartime. The title is a reference to the actual text of advertisements which appeared in newspapers during the war. When advertising failed, young Asian and European women from across Asia were kidnapped or deceived and forced into sexual slavery. Most were teenagers, some as young as 11 years old, and were raped by between 10 to 100 soldiers a day at military rape camps, known as "comfort stations." Women were starved, beaten, tortured, and killed. By some estimates only 25-30% survived the ordeal. Despite growing awareness of the issue of trafficking of women and of sexual slavery as a crime against humanity, this particular history has gone largely unacknowledged. It attempts to bring to light this instance of organized violence against women, and to create a constructive dialogue for the future by acknowledging their place in history.

"Floating Echo," was presented at Socrates Sculpture Park (New York, 2012), Busan Sea Art Festival (Korea, 2011), and The Three River Arts Festival (Pittsburgh, 2013), The work was reviewed in the New York Times and elsewhere. It is a transparent inflatable statue of Buddha sitting on a lotus flower and floating on the East River. It was inspired by my visits to Buddhist temples in Korea and Zen gardens in Japan. Rendered in clear plastic, a ubiquitous everyday material, it could be read simply as a kitsch object, yet this translucent statue reflects its surroundings, both natural and man-made and also echoes the water itself, subtly evoking intangibility, and infinity.

“Dear Leader," exhibited at Franconia Sculpture Park (2011) is an audio, mixed media sculpture exploring the relationship between ancient Confucian tradition and modern Communist rule in contemporary North Korean society. The work is a giant inflatable golden statue of Kim Jung Il, known to his people as the “Dear Leader," which symbolizes both his godlike status, and his concentration of economic power. It stands atop an elaborate triumphal base, on which florescent pink silhouettes of female gymnasts and dancers circle, referencing the annual Arirang festival, the largest gymnastic event in the world with more than 100,000 performers, that celebrates Kim Jung Il, and promotes North Korean ideology. Audio of “Arirang,” the most beloved Korean traditional song, and propaganda songs about Kim Jung Il blare from speakers in the base. This sculpture explores the traditional and isolated point of view of rural North Koreans, for whom values of Confucianism directly support a kind of caste system and rigid hierarchy with the King as demigod figure at the top - the father and the protector of the Nation.

The work references "victory gardens" during World War II. “Homeland Security Garden” investigates our political and psychological in/security in the post 9/11 world. It is a giant artificial maze consisting of 200 “Emergency Kits” created from donated objects that people considered essential to survive a crisis. New Yorkers from many different religious, ethnic, and socioeconomic communities, including people from Asian, Muslim, African American, Jewish and Latino communities, contributed personal items, both intimate and practical. These “Emergency Kits” are then displayed on Astroturf covered pedestals in the structure of a maze or garden. The garden evokes a traditional sense of home and place while the maze represents the difficulties of navigating the world's current complexities. Media coverage of the project appeared in national and international broadcasts including New York 1(NYC), Yue-Sai Kan’s World (China), Tokyo FM (Japan), and the Associated Press. It has been covered in publications including Public Art Review, Time Out New York, The Daily News, The New York Times, the World Journal, Tribeca Trib, NY Arts, The Korea Times, The Korea Daily, Washington Journal, Metro, NY Press, WTOP Radio, Lower Manhattan Info, and the San Diego Union Tribune.

An interactive installation “DNA : Making A Mark,” exhibited at The Queens Museum of Art (New York, 2002), celebrates “individualism and identity” in light of recent genetic advances. Over a thousand people are invited to chew gum (One method of DNA testing), then stick it in plastic grids on the wall, and sign their names - thus encoding DNA, fingerprint, personal expressions, and signature all at once. Over time, the grids transform into a large gestural abstraction which encodes individuality and marks- a collective portrait of people’s personal expressions.

“24/7,” an installation shown at The Asian American Arts Centre (New York, 2002), comments on the nature of the sweatshop and the exploitive aspects of globalization. This installation involves electric sewing machines which run continuously, sewing spools of multicolored thread onto endlessly unraveling rolls of toilet paper filling the installation space. The continuous motion performed by the machines is both repetitive and compulsive. Yet the results are fragile, colorful and infinite in their variety, much like the delicate hand crafted beauty of the work performed in sweatshops.

The State University of New York at Purchase, Purchase, NY, B. F. A.
Parsons School of Design, New York, NY