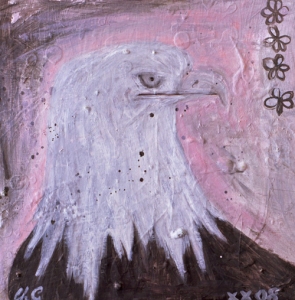 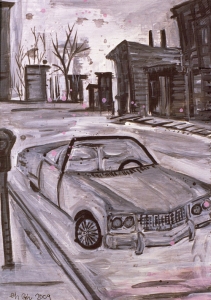 Charlotte Ghiorse
Born in Albany, NY in 1965, Charlotte Ghiorse received her B.F.A in painting at the State University of New York at Albany in 1992. She was Dean's listed twice in her last year there. A year later in 1993 she was the recipient of the Annual Liquitex Excellence in Art Award.
Her mentor, Dennis Byng, a two-time Guggenheim winner himself, pushed her in the direction of First-Generation Abstract Expressionism. She resisted, preferring to paint portraits of buildings. Indeed, her early work reflects the need to hold a line while being
fully abstract. The buildings are divided in to bold, linear color scapes.
Ghiorse then sold a collection—just one week after graduation—of nine paintings to an investment banker (who eerily worked on the 90th floor of WTC tower 1) in NYC in 1993, becoming a part of the Ron Rodriguez collection. She then moved to NYC in 1994 where she has since shown yearly in galleries and alternative art spaces, mostly showing portraits of what she calls "post-modern cartoonism;” pictures of buildings and living spaces revealing a desire for a home. Text and highly detailed patterns of India ink, muted color washes, and "scratches" permeate this work.
In 1996, she photographed Ladder12/Engine3 (FDNY) on the job. From this, Ghiorse produced three large portraits of buildings in various states of destruction, exploding, burning, smoldering. A friend, Lt. Mickey Kross, inspired this series, and it was exhibited that same year at the Soho Fire Museum. Lt. Kross was later, luckily, to be a survivor of the attack on the World Trade Center 2001(in stairwell B), and has generously volunteered his time to be the subject of her documentary "Aftershocks".
In early 2001, by then a first-time mother, Ghiorse began a series about nascent motherhood. In this series, she returned to some of her early training in abstract expressionism. Large, billowy flowers in an aqueous dreamscape reveal at closer inspection, tiny "cartoons" of domestic life. This series was shown at the New York Mercantile Exchange in 2004. Some of these were also loaned to the Dunn Development Corporation in that same year. This series produced a catalogue as well. TATE collections, considered her for acquisition in 2005, and kept a copy of her CV.
After the World Trade Towers collapsed in 2001, Ghiorse painted a series which exhibited at E3 Gallery in New York City in 2003. The series focused on material destruction and it's aftermath, done primarily with gesso, India ink and charcoal; they were Ghiorse's vision of the phantasmic scene of catastrophe. She became very involved in painting ash. Consequently, she then became part of the permanent collection of Lisa De Kooning. In 2003 the New York State Museum accepted a donation from this series, as well. Some of this same series is becoming part of the National 9/11 Memorial Museum. (An online Museum launched in 2008).
Ghiorse also made a short film entitled "Every Woman is a Diva", and in 2004 it screened at Chicks with Flicks, the Cape May New Jersey film festival, and at New York's East Village Pioneer Theater in January of 2005.
Another short film “Preggers” was finished in 2007. She is currently working on a series of paintings in gray, pink, black and white. As well as large-scale portraits of haunted houses from New Orleans, begun in 2002, hopefully to find a show this year.
Lastly, Ghiorse organized and donated paintings for a fundraiser for the Radical Alliance of Women in Afghanistan in 2002, and donated a painting to the Epilepsy Foundation in 2005.
Charlotte Ghiorse lives in NYC with her husband, two sons, and daughter.