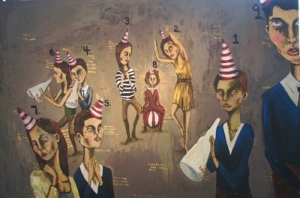 Skyler Chen is finding success as a young multi media artist in New York. High spirited, active and productive, Skyler is known for his colorful,sentimental and inspirational work. Currently he is focusing on his "Republic of Norman" project, primarily on canvas. In addition, he is working on various freelance video productions, including on-line commercial projects.

Skyler grew up in the Southern city of Kaoshiuong in Taiwan , where he graduated from art school and was the winner of several prestigious art contests. After his graduation he moved to the United States , where he spent time in Salt Lake City , Utah further developing his artistic skills.

In 2006 Skyler relocated to New York City, utilizing inspiration from the multi-faceted and multi-cultural environment the Big Apple offers. From his bright studio in Long Island City along the East River in Queens he creates new work almost every day which is posted on his popular blog (www.chenskyler.blogspot.com), and is attracting an ever increasing crowd of fans and followers.