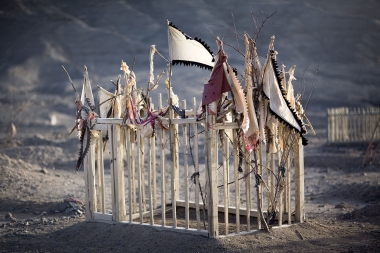 Ross’s work revolves around the liminal spaces in which faith, culture and abstraction meet. Her immersive landscapes and early black and white work, explore the skin of the land. In doing so, she reveals the texture of culture, and, in time, the political realities inextricably bound to place that emerge.

Meanwhile, her portrait work has sought to capture intimacy, and touches on issues of identity, gender and belonging.

Ross also investigates physical manifestations of faith, with journeys to the Sahara and Sinai leading to an ongoing body of work exploring pilgrimage. In recent work, Ross made repeated visits in and around the Taklamakan Desert—visiting sites of Uyghur shrines. These hand-made markers of faith leave an indelible mark on the landscape—touching on cycles of life and death, pilgrimage and sainthood. They are an affirmation of existence, a collective experience that is overpowering in its very humility.

The resulting large-scale photo and video works have been exhibited internationally, and refer to the site-specific traditions of land artists such as Andy Goldsworthy, evoking the existence and awe-inspiring power of landscape. The series culminated in the book Living Shrines of Uyghur China, published by The Monacelli Press and distributed internationally by Random House.

Ross has had exhibitions in the U.S. and Europe. Her work has been shown at the University of California at Berkeley; Rencontres D’Arles Foto Festival, France; the Rubin Museum of Art, New York; Fotografiska Museum, Stockholm, Sweden; University of London, SOAS, Brunei Gallery; and La Vielle Charite, Marseilles, France and Harvard University. In 2016 Ross received a Residency at The Robert Wilson Watermill Foundation and a travel grant through the Asian Cultural Council of New York. Gulf Photo Plus is currently exhibiting Living Shrines in Dubai, UAE.

Ross has worked in North Africa, Central Asia, China, Europe and Azerbaijan. She received an MFA in Visual Arts from Columbia University and a BA from Sarah Lawrence College. Ross is a fellow of the Bronx Museum’s Artist in the Marketplace program; a two time recipient of the Hayward Prize through the American Austrian Foundation; made a commissioned work in Azerbaijan for CICRP/French Ministry of Culture for Marseilles 2013. She has taught at Parsons School of Design, Columbia University and The Harvey Milk School.