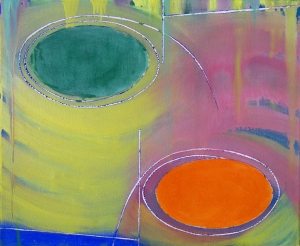 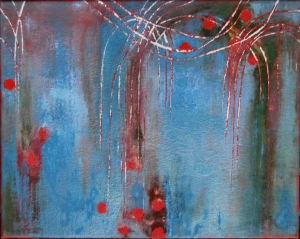 Suejin Jo, Korean born abstract painter based in New York, studied with Stamos and Vytlacil at the Art Students League where she won McDowell Award juried by Richard Pousette D’art and Romare Bearden. One often finds dichotomy in her work such as delicate lines with mass of color or in the theme of “fish and cactus”. She paints with unique medium of oil and dry pigment which gives a picture surface much like old fresco painting. Helen Harrison of The New York Times described her painting as having “the character of an ancient wall painting”.

She exhibited widely in and around New York and in Korea. Her most recent solo show was at the Broome Street Gallery as a result of winning Jacob and Gwendolyn Lawrence Solo Exhibition Award 2008, sponsored by the New York Artists Equity Association and juried by DC Moore Gallery. She participated in Pool Art Fair, New York and Miami 2007, Manif 2008 in Seoul Korea, AAF with Tria Gallery 2009. Her work is in many private and public collections including the Library of Congress, Chase Manhattan Bank, General Instrument Company, Embassy of San Marino, Sogang University, Ahl Foundation, and Korea Exchange Bank. Her paintings are currently in the “Art for Embassies” program in East Timor and Mexico City.