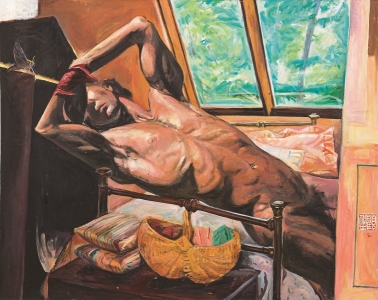 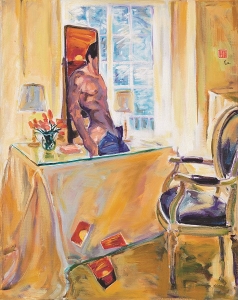 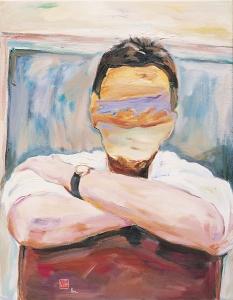 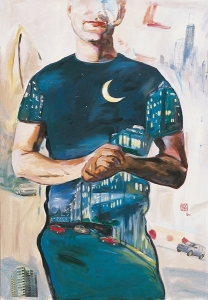 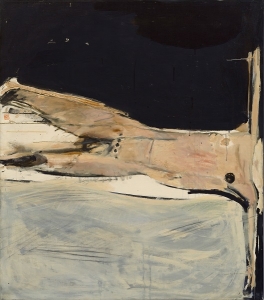 Ku Fu-sheng was born in Shanghai, China in 1934. His family moved to Taiwan in 1948 with his father, General Ku Chu-Tung. After completing his formal art education at National Taiwan Normal University in 1958, he was then invited and joined the Fifth Moon Group which was in its second year. This marked the true beginning of his artistic development in Taiwan. The Fifth Moon Group was full of vitality and vigor, and sparked off a revolutionary movement among artists in Taiwan to break away from tradition. One of the objectives of these young artists was working to develop Chinese modern art and let nothing discourage them. He went to Paris in 1961 where he studied and painted for eighteen months. From Paris he went to New York where he studied at the well-known Art Students League from 1963 to 1965. After leaving New York, he has lived in Chicago, San Francisco and Portland, Oregon. In 2008 he moved to Rancho Cucamonga, California where he has remained living a somewhat reclusive lifestyle up to the present. He calls this the freest period of his life, a time when he has been able to paint to his heart's content.

Through his art he expresses and records all the love, desire and yearning that cannot be put into words. Human beings are the main subject of his art. People's meeting and parting, togetherness and separation, the complexity and diversity of human nature, and the illusions and realities of human life all figure among the main themes being expressed. While canvas and paper being the backdrop for most of his work, his use of other media and materials such as clothing, fabrics, gold and silver leaf, rope and wood lend variety and interest to his art. Much of his work falls into the category known as collage. There is nothing simplistic about his human figures which are rarely realistic but instead portray lonely bodies devoid of individual characteristics, some even lacking faces or heads. His world has always been breaking through the bounds of rationality to make his fantasies and dreams fly wherever he pleases.

Viewers often take note of his delightful sense of humor - even in his most serious paintings one can find that humor. His humor is one of his most charming attributes. Each time you carefully study his paintings, you will find something you didn't notice on an earlier viewing.


Works will be exhibited in this retrospective: