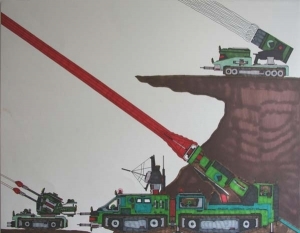 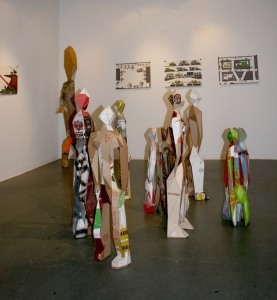 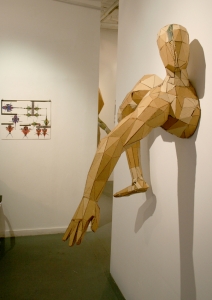 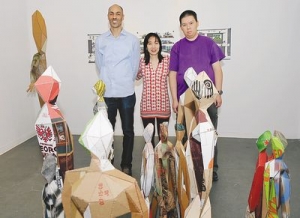 The exhibition, War Toys/Toy Wars presents the color marker rendering of James Wong alongside the figurative cardboard constructions of Roberto Visani. Both artists use ordinary materials to explore the relationship of toys, war imagery, geometric patterns, and fictionalized realities. The works are at once aesthetic, playful and disturbing in content. The title, War Toys/Toy Wars emphasizes the fine line and multiple meanings between fiction and fact, during play and at war.

James Wong has been creating drawings of his Future Wars for over twenty years, numbering more than 7000 drawings to date. Robot crews, scorpion drones, hover tanks, fantastical spaceships, and fighter planes of endless configurations inhabit and traverse the drawings of James Wong. With each new page, a new species of weaponry is created, replete with equipment, logo and military personnel ranking details. James was born in Hong Kong, grew up in New York City Chinatown, and graduated from Art & Design High School in NYC. His work has been shown at Margaret Bodell Gallery, Henry Street Settlement, Cuchifritos and American Primitive Gallery, NYC.

Roberto Visani’s cardboard figurative constructions are handcrafted with the aid of a vector based, 3-D modeling software. Thought built from a flat pattern, no two are identical and reflects on cloning and the individual. The figures recall statuary, souvenirs, model toys and the Do-It-Yourself sensibility. Roberto Visani was born in Faenza, Italy, lives in NY and received a BFA from Minnesota State University and MFA from the University in Michigan. Roberto’s work has been shown at Studio Museum in Harlem, New Museum, and Sculpture Center, among others.