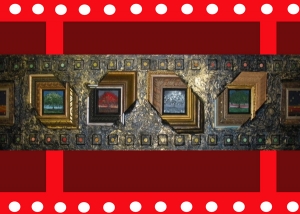 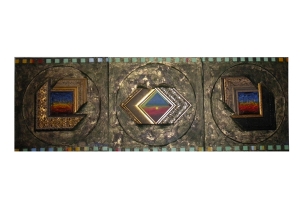 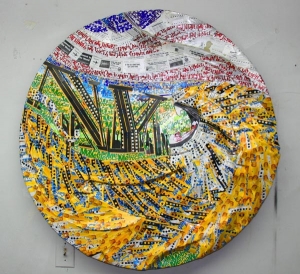 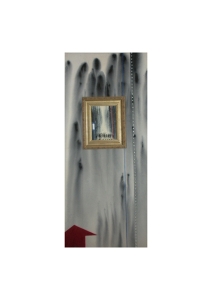 Lin has been working on this “The Hart” series for over 20 years. The name of the series stands for the artist’s aim to bring people’s hearts together by creating an artwork with a collaboration of artists and people. The artist call this process, “behavioral art,” which he tries to bring people closer to other people, people closer to art, and art closer to people. The process of creation as well as communication with people is important parts of his artwork. This is the style of expression and is the art he developed in the U.S.
Works in “The Hart” series includes: “Christmas Love Tree,” created with 200,000 pacifiers in 2006 and “Gate of Wisdom“, created with 300,000 donation of pens, which was exhibited at the Aichi World Expo, Japan in 2005.

Shih-Pao says: “a life is a drama and a drama is a life,” and “dream is a force to move human spices, and so, the evolution starts from a dream.” The artist believes that each individual is born with a dream and live to achieve that dream. Imaging, seeking, and achieving one’s own dream is a 3-acts-drama called “life.”
A dream emerges from a daily life. For an artist, the dream comes to life as a language of the art (that is an art work). However, as an artist, Shih-Pao knows how difficult it is to achieve one’s dream. He also knows that there are people who fight a difficult game with determination to achieve one’s dream.

Shih-Pao says that he had been producing his art in a vision “art is more beautiful than a life.” However, he never fully satisfied with one or two dimensional art. He felt that something was missing. He realized that he wants to create a film, a film that portrays more than his past visual art works. A film that merges human life and arts. Everyone who involve in the filmmaking is an artist. It is not a story or a script that inspired the artist to make a film, because the story will evolve during the process. His inspiration is a dream and people who have a dream.

The Dream Collection Project will be possible not only with one’s efforts, but with the corporation of one’s family, friends, and coworkers. The story of the human spices has began its journey. It will need tons of support from everyone. The artist ask those who have achieved their dram to help their successors. He asks the predecessors to give chance that they were given.

The artist has been portraying combination of logics and emotions as behavioral art. In order to achieve this Dream Collection Project, dream (emotions) and logics goes hand in hand.


The Dream Collection Project Fundraising Plan
The artist believes that collecting goodwill and give them back to the society is to engage the society in a wheel of life. This is a plan to collect the goodwill.