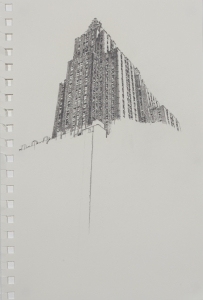 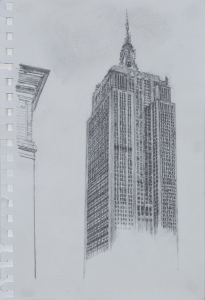 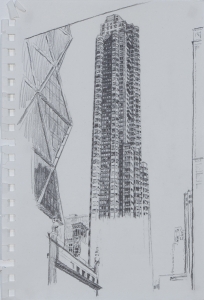 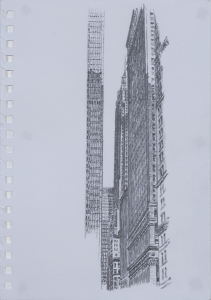 “Unfinished Journey” is a new “in-progress” exhibit at the 456 Gallery by SHYU Ruey-Shiann, who is known for his kinetic art. To SHYU Ruey-Shiann, journey has always been a matter of progression – starting from zero to infinity and then returning to zero. Such is the cyclical state of the universe, life and art. With this concept, this exhibit will show a series of “unfinished” drawings of New York City and one improvised kinetic sculpture that SHYU Ruey-Shiann will create on site. This improvisational piece will begin in a bare state and then continuously progress as time goes. Its final state is unknown.
SHYU Ruey-Shiann began this New York City drawings series at the end of 2007 and continuing until now. Considering this to be an “unfinished Journey,” SHYU says “even as the series began, it meant there would not be an end as life is too short for one to record every corner of this magnificently energetic city. One can only record what he sees as best as he could. Behind every building there is a unique story – from the past to the present, from concrete sense to abstract ideas.” While without the tools to create his kinetic art, SHYU often walked the streets of New York with just a pencil, sketching the lines of these building. He is never too concerned about drawing an exact representation of the buildings. Rather, these illustrations show only parts of them with much whitespaces on the page, which creates a sense of unknown and mystique. “Unfinished Journey” - SHYU Ruey-Shiann is still continuing this never-ending journey.

SHYU Ruey-Shiann is one of the premier pioneering artists in Taiwan’s contemporary kinetic art movement. In the first ten years of his art education, SHYU focused on academic, traditional western paintings and sculptures. In 1993, he began his studies at Aix-en-Provence Art College, in the south of France. During that time, he came to understand a wide variety of creative methods and materials among which include – steel, machinery, and kinetic - ones that most influenced him until today and initiated his path to create kinetic art. Since returned to Taiwan after graduating from France in 1997, kinetic art has become his relentless, self-challenging pursuit as well as a stylistic and unique language of his. In recent years, SHYU has frequently been invited to participate in international exhibits, including the 2011 Kinetica Art Fair in Ambika, London, solo exhibitions at the Taipei Fine Arts Museum, the ISE Foundation in New York, and the White Rabbit Gallery in Sydney, Australia. Currently, SHYU Ruey-Shiann’s large-scale kinetic installation, “Traveler’s Wings,” which has garnered widely positive critical reviews, is being exhibited at the National Taiwan Museum of Fine Arts and will travel to the National Art Museum of China in Beijing.