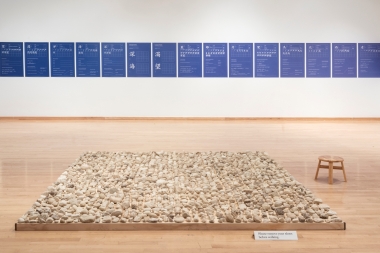 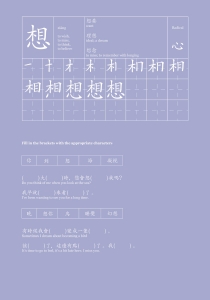 Chinese American Arts Council/Gallery 456 is pleased to present Heart in My Mouth, a solo exhibition by Rachel Hsu, on view from April 8, 2022 to May 6, 2022.

Rachel Hsu’s solo exhibition, Heart in My Mouth, attends to the contradictions inherent in marginalized existence and explores the varied politics of and apprehensions toward assimilation and exceptionalism. By engaging language as a material, the exhibition negotiates racial identity and heightens the yearning that emerges from distance and displacement by gradually unfolding absence, relational ruptures, and slippages in translation.

Fetch the Moon from the Seabed (海底撈月) is a long-form poem that investigates yearning and immigration through language and translation. Taking the form of a Chinese language-learning workbook, the poem reveals the emotional and physical exertion that speaking a second language and cultural assimilation requires. Mental exertion is further heightened in the translation of emotional endurance into physical persistence in Tending. The work invites viewers to remove their shoes and walk across an expanse of river stones to experience the fluctuating pain and rejuvenation of reflexology. Arranged according to size, shape, and texture, moments of respite are diffused amongst acute pressure. A reimagined pressure point diagram is available as a takeaway—two distinct narratives reveal themes of tenderness and violence, pain and healing, grief and joy. Excellence is the Goal (the goal is death) further engages coexisting contradictions and calls for a critical examination of the relationship between exceptionalism, assimilation, and American violence. Weighed against Tou Thao’s participation in the murder of George Floyd, anti-Asian hate crimes, the Atlanta spa shootings, and attention to Asian lives, American assimilation and human value are inextricably tied to violence and death. The out-of-reach ship’s bell speaks to a grand, impossible ambition that requires immense effort. Commonly used on modern ships as a warning signal, the ship’s bell also recalls the voyage itself—of leaving and arriving. Just underneath the bell reads: I want so badly to survive this.

Whether it’s a slow traverse across space or an impossible reach, the exhibition Heart in My Mouth demands the effort of translation, healing, and critical self examination to be felt and endured. As Cathy Park Hong writes in Minor Feelings: An Asian American Reckoning, “If you want to truly understand someone’s accented English, you have to slow down and listen with your body.” How can we better attend to one another? How can we care for our entangled pain and tenderness?

Heart in My Mouth: Language as Agency and the Art of Rachel Hsu
by Alana Dao

The Chinese word for missing someone is the same as remembering them.
- Rachel Hsu, “Be/Holding the Sea,” Honey Literary 2022

I, like the artist Rachel Hsu and many others, am an Asian American woman who knows what it feels to both miss and remember. As a preschooler in British Hong Kong where my father’s family is from, I learned to speak and write in Chinese, filling out workbook after workbook, diligently mimicking the characters set out before me. When we returned to the United States where I’d been born, my Chinese literacy stopped there — stunted, unmoving past the most basic, kindergarten level. I miss, I remember, and I don’t.

Rachel Hsu’s work uses this same feeling of in-between. Her latest exhibition, Heart in My Mouth, asks us to think in feeling versus answer, in action versus simply viewing. Whether it is a bell hanging on a wall, rocks under foot, or upending an educational text, Hsu’s work asks us to engage in a never ending space of movement and interrogation.

Her visual poem, Fetch the Moon from the Seabed (海底撈月), takes the form of those Chinese language-learning workbooks from in my childhood. Rather than a means to educate directly, this poem explores the feeling of desire and what gaining and losing language may mean. In describing how the Chinese letters are constructed, Hsu also explains how things are able to build upon one another. For example, how the word for ocean is made up of other words: water, mother, foreign — like a set of Matryoshka dolls unfolding and revealing small bits of themselves over time.

As a book, Fetch the Moon from the Seabed (海底撈月) allows the viewer to flip through the pages, partaking in a language lesson. The pages flow from blue to white or inversely,depending on reading direction — left to right (Western) and right to left (traditional Chinese), signifying, as Hsu tells me, “the blue of distance, the whiteness of possibility.” As an installation, this piece takes on a different form, hanging in large format on the wall, allowing viewers to move and flow from one page to another.

The use of space and multiple formats allow for different perspectives and for us to feel more deeply. The choice of traditional Chinese versus simplified Chinese speaks to Hsu’s delicious attention to detail. Traditional Chinese is the vernacular form used in Taiwan versus mainland China, speaking to her family’s lineage. Small details such as these are only noticeable to those who are familiar with the nuance while remaining accessible to any viewer who engages with her work. In all its formats, this long-form poem must be viewed through the act of physical movement -- walking and looking on a gallery wall, or flipping a book left to right, right to left.

This embodied element in Hsu’s work asks the viewer to move in order to engage more deeply through the use of their own bodies. In Tending, approximately 500 pounds of river stones in various sizes are placed into an orderly eight by eight foot square. There is an invitation for guests to remove their shoes and walk across them, feeling at once the pain and rejuvenation of massage. For Tending, Hsu washed each stone by hand which she describes as “a punishing process of care that erodes my own skin” — her hands tending to each one, our feet pressing upon where we may choose to tread. These acts call attention to how we relate to each other, and explore the true cost of care work, rendering visible the toll on the one tending in the name of those being tended to.

When I first spoke to the artist, it happened to be the day before the one-year anniversary of the Atlanta shootings where Asian American women — mothers, care workers, immigrants -- were targeted and attacked, gunned down in a place meant to care for others. It felt meaningful for me to be in conversation with another Asian American artist that day. We spoke of how this horrific hate crime further called attention to centuries-long discrimination against the AAPI community and how this type of visibility made us wonder: do we want to even be seen because, in the end, what do people see in us?

Hsu explains her piece Excellence is the Goal (the goal is death) came into being after the Atlanta shootings. She recalled society’s need to celebrate Asian excellence and wondered why our value was dependent on our excellence and only in death. A ship’s bell — a signal of warning — is placed above text that reads “I want so badly to survive this.” The bell hangs just out of reach, representing how excellence and subsequently, acceptance and being seen outside of our pain and suffering may always be unattainable, an ever-moving goal post. The title of the work is indebted to Arthur Jafa’s film, “Love is the Message, the Message is Death”, allowing her work to situate itself into the larger oeuvre of work that investigates in/visibility, identity, and endurance in this world.

When asked about her influences, Hsu often turns to writers like Ross Gay, Cathy Park Hong or Ocean Vuong who explore the co-existence of grief and care. This is evident in her work where language, and writing are both an implicit and explicit form of visual expression investigating home and migration.

As an adult, I am a writer whose work most often deals with text — essays, zines, collaged words. But always in English. Having lost my ability to speak or write Chinese, I know only th language of my colonizer, can only work within the confines of it. Am I trying to find something that I lost? Hsu’s work makes me realize what I’ve found: I am now in the presence of other Asian American women, artists, and our collectively lived American experience. Color is a language that I cannot speak but I understand the blue of desire more intimately now.

Hsu’s use of grammar, control, and movement hints at organization but do not confuse this with constriction. By using order intentionally, her work interrogates the ties that bind. Rather than leading the viewer to an answer, Hsu proposes a new way forward — through inquiry for the sake of asking, allowing our bodies to be the vessel for the stories that can move across oceans, distance, time. As you look up at the bell of excellence — never yours to touch —, walk with Tending beneath your bare feet, flip through Fetch the Moon from the Seabed (海底撈月) in an attempt to grasp at order, you will find that there is no clear beginning, no final stop. Allow yourself to both miss and remember. There is no place to go but existence, but sensation.