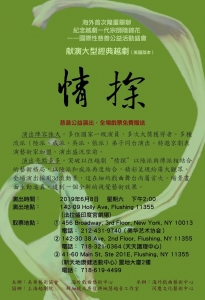 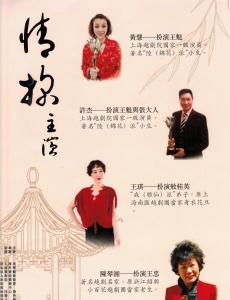 To put together the international performance, we have invited Lu Style first-level performers from Shanghai Yue Opera House along with award-winning Chu, Wu, and Zhang Style actors and actress. Traditionally, “A Test of Love” is performed with the combination of Lu Style and Fu Style. But our production puts together Lu and Chu Style to interpret the classic. On stage, a newly created 3D design will make its debut for the New York audience.

“A Test of Love”, or “Wang Kui Betrays Guiying”, is a Chinese theater play from the 11th-century Song dynasty. It has become a classical tragic story where the female protagonist was betrayed by her lover.

A young courtesan named Jiao Guiying falls in love with an impoverished student named Wang Kui, she supports him with her savings as he prepares for the examination for an imperial court position. Wang Kui promises her that once he succeeds in the examination, held in the capital, Kaifeng, he would immediately send for her to join him at the capital. However, after receiving top honor in the examination and becoming the talk of the town, Wang writes Guiying a dear-john letter to tell her that he now plans to marry a high-ranking minister's daughter. Upon receiving the letter, Guiying commits suicide in the Sea God Temple where they first met. Her ghost then wanders from the Underworld to Wang Kui's residence in the capital, where she haunts him and later captures and drags him to Hell.

•    Huang Hui (黃慧):
A first-level actress of Shanghai Yue Opera House, Huang Hui plays "Lu style" xiaosheng role and is one of the most popular Yue actresses in China nowadays.

•    Angel Wang (王琪) :
Angel Wang is a Chu Style Yue opera actress living in California. Before she moved to the U.S., she was a first-level actress of Shanghai Yue Opera House. She has been promoting Yue Opera in the U.S. for over 2 decades.