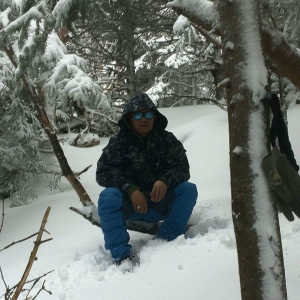 Sculptor, installation artist, theater production/lighting designer, film art director and sous chef, Perry Mamaril hails from the mountain province of Northern Luzon, in the Philippines. He attended St. Louis University and University of Baguio in Baguio City in the Philippines where he studied Architecture, Engineering and Electrical Communications.

His use of bamboo – a nationally recognized symbol of the resilient nature of the Filipino people – and other native Philippine materials is greatly influenced by the indigenous culture in the northern Philippines. Mamaril’s bamboo light sculptures and installations comment on the convergence of the traditional and contemporary, first and third world, rural and urban environments.

He is a founding member of the Baguio Arts Guild, the first regional artists’ collective to be organized after the 1986 People’s Power Revolution and has exhibited installations and sculptures in the annual International Baguio Arts Festivals. He has had solo shows worldwide, in cities such as New York City, Honolulu and Manila, and his work has been shown in preeminent galleries throughout the Philippine Islands.

Group shows include New York University, San Francisco Craft & Folk Art Museum, the Bishop Museum in Honolulu, and the Seoul Art Center in South Korea. Mamaril has held artist residencies at Yerba Buena Center for the Arts in San Francisco, the Cultural Center of the Philippines and at the Galeri Kamarikutan on the island of Palawan in the Philippines.

Recently he has been devoting much of his time as a sous chef in the kitchens of some well established restaurants in New York City which include Cendrillon and Kuma Inn.