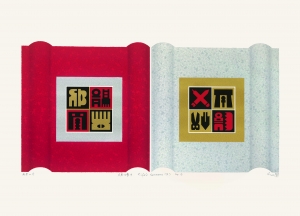 Liao Shiou-Ping, born 1936 in Taipei, lived near Monga's Longshan Temple when he was little. His childhood memory of temple ceremonies and traditional Taiwanese cultures has become not only his source of inspirations, but also a modern language of art, as he rose to international art world. His artworks characterized by oriental aesthetics and his Taiwanese style symbol series have become his personal icons that feature Taiwan’s cultural characterizations and unique art language. Based on printmaking technique, Liao combines the modern concept of modeling and local symbols to express Taiwan’s own aesthetics and turn them into a new cultural icon that contains a collective memory, a cultural identity, and self-consciousness. Liao has never ceased to create artworks. He held his first solo exhibition in 1964, and is still creating today.

Liao Shiou-Ping excels in balanced, symmetrical, and orderly structures, and conveys equilibrium in his works. Since his Symbol of Gate series, he has been arranging symbols to depict the relationships between Yin and Yang, the sky and the earth, people and the universe. Liao also uses symbols to explore life. Later, he developed the Life Symbol series that signifies prosperity and the auspiciousness of people. He turns ordinary elements in everyday life into delicate and dignified cultural icons that attach new meanings to local symbols.