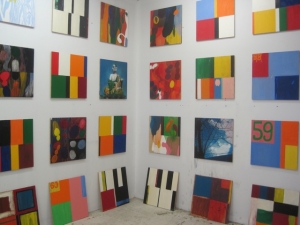 Ting Yih was born 1960 in Taiwan and immigrated to New York with his family in 1970. He started to draw and paint as a child in Taiwan, and as a teen in New York he attended the High School of Art and Design. He went on to the California Institute of the Arts, and the Whitney Museum Independent Study Program where he met his wife, Mary Ann Toman who is a film and video editor. He spent a year studying in Germany. In 1995 out of frustration with art and life he decided to study philosophy at the New School for Social Research. After receiving a Master Degree he started to teach. Presently he is Adjunct Professor of Philosophy at Adelphi University and New Jersey City University, specializing in Deep Ecology and Eastern Philosophy. When he is not teaching philosophy he paints in his studio in the historic Brooklyn Navy Yard and rehabilitates an old house in the Catskills. He and Mary Ann live in the East Village and have two sons; one lives in San Francisco, and the other is in college upstate. They also have a female African Gray parrot name Doctor who likes it when they bring her into the shower.