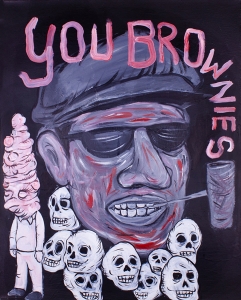 Lazaro Juan was born in Manila Philippines. He began his early education by attending Colegio de San Juan de Letran in Manila until immigrating in the United States during his early teens.
He then attended a drawing workshop at the Fred P. Pomerantz Art and Design Center at FIT in NYC.
In doing so continued his Fine Art education in earning a BFA at William Paterson University in Wayne New Jersey.

His work in utilizing painting and sculpture focuses on redefining his Filipino colonial heritage from both Spanish and American influences which has shaped the modern identity of Philippines and its history.

The content gets its inspiration from post colonial studies, history, and editorial cartoons during the American occupation.

Using these subjects in creating a representation of the consequences of colonialism, its psychological conflicts, and the dizzying vertigo of Filipino identity amidst the past atrocities of imperial and colonial rule.

The imagery contains a multitude of symbols addressing colonial domination and violence.

All coalescing in containing elements of caricature and text, within a resounding pictorial mass of a nightmarish landscape.