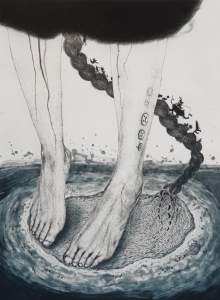 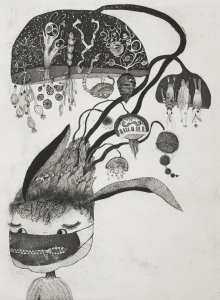 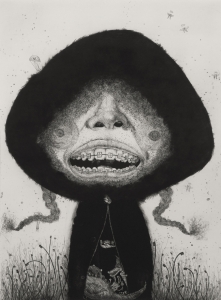 Szu-Wei Ho was born in Taichung, Taiwan in 1985. She graduated from National Taiwan Normal University with a bachelor degree in English Language and Literature and a minor in Fine Arts. Then she went to New York to pursue her study of Illustration in School of Visual Arts, and moved on to Pratt Institute with a MFA degree in Fine Arts, majoring in Printmaking, in 2011.

Her print has been chosen by International Print Center New York in the NEW PRINT program 2012, and also featured in Creative Quarterly, a magazine for Art and Design. She received Van Lier Fellowship from New York Foundation for the Arts, in 2012, and was a residency artist in Vermont Studio Center the same year.

Nature and literature has been the major inspiration in her creation, as well as her everyday experiences. In her drawings and prints, there is dense detail that entails a narrative which the viewers would have to find out on their own. Usually the characters are the subject, whether human, or human-like creatures, are in an environment that only contain themselves, creating a tiny world in each image. This surreal, illustrative, anecdotal way of telling story is what Szu-Wei is most interested about, by adding her personal encounters here and there.

Szu-Wei has taught printmaking and drawing classes in Queens Museum of Art. She works as an art administrator and educator. Meanwhile she is still creating and experimenting with drawings, prints, and ceramics.