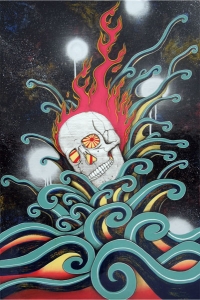 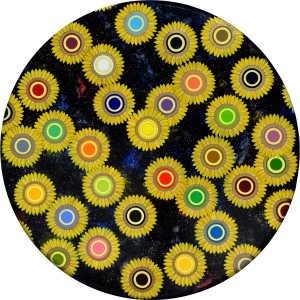 Through my work, I aim to express the idea that life, death, mortality, and the universe itself are cyclical realities. I attribute the success I’ve had as an artist to the hybrid self-identity I carry as a Japanese.
Located at the eastern end of the Silk Road, a unique form of expression has developed in Japan with the arrival of various ways of thought and technology. Japan’s religious beliefs are also complicated, with many people accepting the diverse doctrines present within Shintoism, Buddhism, and even Christianity. One of these is the unique Buddhist concept Shogyo-mujou, which teaches that all things are in flux and nothing is permanent. The reason this concept still resonates so strongly among the Japanese is that the nation of Japan lives in constant threat of life-shattering disasters like earthquakes, tsunamis, and typhoons. In particular, the 2011 Tohoku earthquake and tsunami caused me to reflect on this concept and moved me to express these ideas through art.
Ever since moving to New York, I have had to change the types of tools and materials I use in my art. So while I still paint in the traditional Japanese style, with the canvas set on a flat surface, I use acrylic paints and spray paint. And yet the materials that I use are not the only thing that has changed; everything from the landscape surrounding me to the consumer culture is different here, which has inspired me to use stronger colors than before. I also do not deny that I seek a degree of craftsmanship perfection through painting nor the flat-decorative nature of my work. This is because my works are based on traditional Japanese techniques and concepts; In Japan, art and craft had no clear separation until the spread of Western culture.
Japanese artwork is not structured around fixed-point perspective, and focus has always been placed on surface appearance. Following in that tradition, my work also features abstract and geometrical shapes along with representational motifs like flowers that always face forward. I see using these shapes and patterns that cover the entire surface, and not using perspective or center-focused composition, as a challenge in Western-style painting. In this way, by making my entry in the classic Western inspired contemporary art world in the US while utilizing Japanese expression and sensibilities, I am in the process of exploring a completely new form of expression.