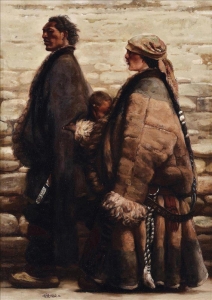 Chen Danqing (Chinese, b.1953) is known for his Realist paintings, garnering critical acclaim for his portraits of Tibetans, which he created shortly after China’s opening in the late 1970s and early 1980s. A former student at the China Central Academy of Fine Arts, Chen’s style is inspired by the French Realist Jean-Francois Millet.

In 1982, Chen immigrated to the United States, where he spent the next 18 years writing and painting in New York City. During his time in New York, Chen befriended fellow artist and activist Ai Weiwei, and in 2007, the two published the book Interviews Not About Art. In 2000, Chen returned to China, and became an outspoken critic against the Communist Party. He currently lives and works in Beijing.