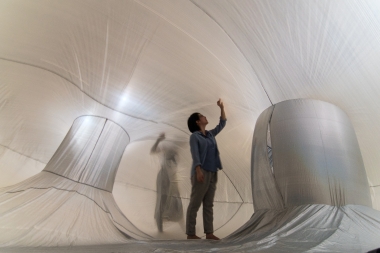 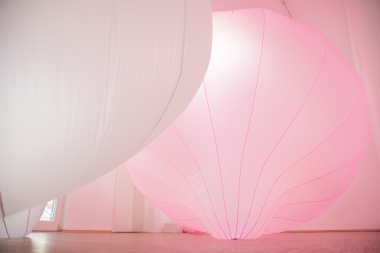 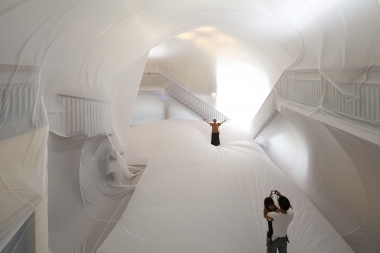 Wang Te-Yu, born in 1970, received M.F.A. Fine Arts from the Taipei National University of the Arts in 2005, works and lives in Taipei. Wang Te-Yu's works have always sought simple ideas. She has always tried to explore the feeling of spatial presence with an extreme economy of media, and goes on to meditate on the existential form and situation of people in these spaces. In 1990 she began spreading out a pure spatial form with fabrics of different material, and this has become a primary motif in the artist's work. In a series of spatial creations named with serial numbers, she has pursued continuous research into the spatial theme, transforming the subjective / objective relationship between spaces and people, and letting the body's sensory experience replace visual experience. In this way the interactive experience between viewers and works functions directly as a pathway that the artist provides for "entry" into the spirit of the work—a work that symbolizes the artist's subjective consciousness. The work also unexpectedly encompasses the participating viewer's subjective experience and constructs a commonly-sensed space through the mechanism of interaction. Wang has held more than 20 solo exhibitons since 1995 and participated in various international exhibitions including Taipei Biennial in Taipei Fine Arts Museum(1996), Promenade in Asia in Art Tower Mito, Japan(2001), 4e Biennale d'Art Contemporain in Enghien-les-Bains, France (2002), Yokohama Triennale 2005 in Japan, City on the Move Art Festival in Taipei(2006), Taiwan Biennial in National Taiwan Museum of Fine Arts(2016) and KENPOKU ART 2016 in Japan.