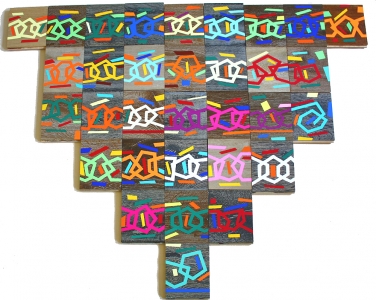 She completed two compelling permanent public artworks for the City of New York. She installed a glass mosaic mural on the platform of the Buhre Avenue subway station through the MTA Arts for Transit Commission, and awarded competitively. Her other public mural work, titled “Love You,” was placed in New York City’s P.S. 306, commissioned by the Department of Cultural Affairs Percent for Art Program, a competitive award. Her joyful celebration of color and delight was featured on the cover of Mayor Bloomberg’s New York City's Mayor's Management Report.

She has had solo exhibitions in the United States, Korea and France. Her work has been included in over 100 juried and invitational group exhibitions across the United States and was exhibited at the U.S. Embassador's residence in Seoul, Korea by the Art in Embassies Program, Department of State, Washington DC. The New York Times, The Philadelphia Inquirer, New Jersey- Herald News, Louisiana Magazine-The Advocate, Queens Chronicle and many others have favorably reviewed her work. She has been featured in MarquisWho's Who in American Art and New American Paintings, Juried Exhibition in Print, with inclusion of her work on the back cover. Her work was featured in U.S. Department of State's 2012 Desk Calendar and numerous times for the Cover Art of books, News Paper.

She has her BFA from Dongduk Women’s University in Seoul, Korea and her MFA from the École Nationale Supérieure des Beaux-Arts de Lyon, France. She lives and works in New York City.