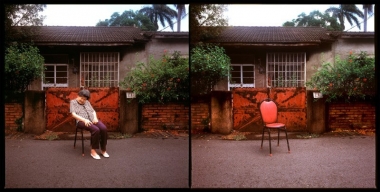 Lulu Shur-tzy Hou graduated from the Department of Philosophy at National Taiwan University and has an Imaging Arts Master of Fine Art from the Rochester Institute of Technology. Her workhave been exhibited in Taiwan, Japan, Hong Kong, China, the U.S, the U.K, Italy and Vienna. Mrs. Hou is a highly regarded image artist. Her works explore issues related to gender identification, self-identification, third-world female laborers, thus her works voice and reflect social-economic issues of modern Taiwan. This exhibition at the Kuangdu Museum of Fine Arts focuses on Asian foreign brides in Taiwan, in which Mrs. Hou explores the lives of these female immigrants, their self-consciousness and struggle with identity.

Hou’s representative works include “Take a picture, it lasts longer” series in 1996 which probes the male’s sensual indulgence in peeping female bodies. The work is composed of eight series of self-directed, self-performed as well as self-photographed photographs. The series came from a cynical view how males downgraded females’ physical being with their lustful peeping, at the same time the art works attempt to reflect the struggle between the deeper part of oneself versus the norms set by the society.

“Labors and Labels”(1997) is a series of visual artwork which depicts the lives of women who worked in the textile industry in a satellite city of Taipei. Textile industry, one of the major industries in the past, had created job opportunities for women. However, behind the success of this industry lies the prime time of the workers’ lives. She attempts to present the images of female textile workers laid behind the miracle of Taiwan economy, concerns about how the developed countries’ foreign trades exploited the third-world female workers.

The work “Guess who you are”(1998) focuses on the theme of identity of different ethnic groups in Tainan area. Through interviews and photographs, the value of life of various ethnic groups in Taiwan and their viewpoints were shown to the public. The series also attempted to reflect the multiple facets and inner conflicts regarding identity that resulted from political instability. In 2000 he work “Japan-Eye-Love-You”(2000) was exhibited in Yokohama Museum of Fine Arts. The art workcriticized and mocked the prevailing Japanese pornographic culture, providing an alternative viewpoint on eroticism in male-female relationship. “What is happiness” (2002) is a series of public art work installed in a junior-high school in Taipei. Mrs. Hou first gave a few courses on art to the students to build a base, then she engaged in-depth conversations with the students and teachers, Mrs. Hou captured the happy moment of a city school through the use of images, language, publication and interaction, created a content and relaxed atmosphere within the schooling environment.

For the past few years, Mrs. Hou has expanded her interests from feminist movement to concerns on social classes, ethnic, community and other social-political issues in Taiwan. The works shown at this exhibition in the Kuandu Museum of Fine Arts is a sequel to her broad interests in social themes.