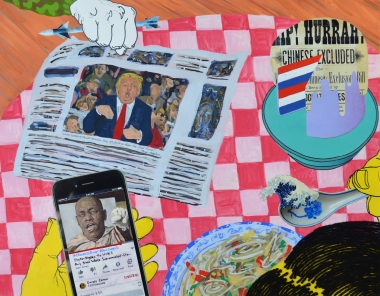 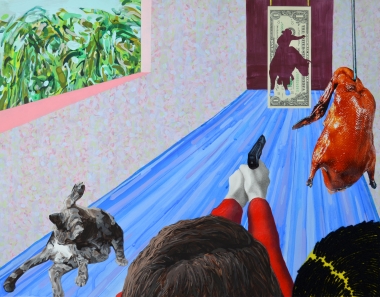 Yikui (Coy) Gu was born in 1983 in Nantong, China and emigrated to the United States at the age of seven, growing up in Albany, NY. He has a BFA from Long Island University and an MFA from the Pennsylvania Academy of the Fine Arts.

He has exhibited his work nationally in New York, Miami, Philadelphia, Washington, D.C., Boston, and St. Louis; and internationally in London, Berlin, and Siena, Italy. His first New York solo exhibit is scheduled for Spring 2021 at the Chinese American Arts Council. He has been an artist in residence at the School of Visual Arts in New York, and has been reviewed in the Washington Post, KunstForum International, the Philadelphia Inquirer, and the Yale Daily News. His work has appeared on the cover of the Lower East Side Review, and in Fresh Paint and Art Maze. His work is held in the permanent collections of the Brooklyn Art Library (NYC), the Siena Art Institute (Siena, Italy), Camden County College (Blackwood, NJ), and numerous private collections.

He resides in Philadelphia and teaches as Associate Professor of Studio Art at the College of Southern Maryland. In his time off he enjoys traveling, good Belgian beers, and keeping up to date as a sneakerhead. The bulk of his time, however, is spent in the studio where he is currently plotting his takeover of the international art world, while remaining mostly harmless.

Classic Yellow is a series of autobiographical work using my wife and I as subject matter. In probing the specificity, both lived and imagined, of our immigrant Chinese-German marriage, universal truths and absurdities are revealed. The spaces between order and chaos, sincerity and irony, or design and chance are explored using visual elements from the internet, hip hop culture, and art history. The combination of painting, drawing, and collage, alongside materials ranging from chopsticks to bodily fluids juxtapose against each other, echoing our relationship and serving as a metaphor for it. Through this combination of political, cultural, and domestic imagery, I hope to affirm and subvert the contemporary human condition through a Yellow lens.