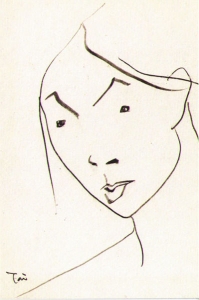 Kwok- Yee Tai, a largely self taught artist, was born in 1947 in Hong Kong. Her father’s artist friend taught her briefly. He was the first teacher who perceived in her work, an original spirit and thereafter left her alone to follow her own artistic instincts.
After high school, she studied abroad in the United States, graduating with a BFA in Cinematography from the California Institute of the Arts in 1970. She moved to New York and continued her pursuit in the Fine Arts. Her professional activities included commissions for ceramic tiles, participation in several group shows and solo exhibitions at Soho 20 Gallery in 1983 and 1985.
In 1979, she was diagnosed with scleroderma, a rare connective tissue disorder. In 1989 she was compelled to move to California because New York’s harsh winters would cause her extremities to turn blue from contracting blood vessels. In 2002, she moved to Honolulu where the climate suited her.
In March 2010, she was diagnosed with stage 4 lung caner, the type which scleroderma patients are susceptible to. Her love of drawing and painting never abated through her illnesses. Losing fingertips and constantly fighting infections, she lived life to the fullest, cooking, gardening, hiking and going to museums. Her enthusiasm was an inspiration to family and friends.
In the decade of the 80’s in New York, she accomplished a substantial portfolio of live figure drawings in her own distinctive style. During her period in California, she exhibited at the Chinese Cultural Center in San Francisco, Marine society of Artists, the Frances Young Gallery, and the college of Marine Fine Arts Gallery. In 1991 she received a first prize at the Marine Society of Artists sixth annual art competition. In Marin County, California, she enjoyed going to the Marin Recycling Center to observe the animals, particularly the pigs. She produced her most acclaimed work in this “garbage dump.” Since 2005, she took painting classes at the Kapiolani Community College in Honolulu. She discovered that large canvases were as satisfying to her sense of line and space as her previous smaller works.
Kwok-Yee had the ability to extract the essence of what she saw to create images with flowing lines and colors. She reduced and eliminated the details of everyday world to the essential and the fundamental. She aimed for pure form, and in her composition, she showed an unusual talent in the interaction of form and space. Her art is original and delightful, sometimes whimsical and naïve, yet sophisticated in its abstraction and style. Part of the above assessment was extracted from the writing of Lucy Li, Ph.D., past curator of the Chinese Cultural Center in San Francisco.
Kwok-Yee’s daughter and siblings would like to celebrate her work, which radiates lucidity, sensitivity and joy. It is a loving tribute to a special human being of grace and strength.
Kwok-Yee passed away on January 25th, 2011.