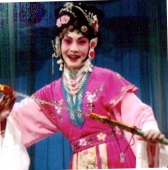 TONG XIAO LING (Charlene Tong Shaw) began studying Beijing Opera at age six under the tutelage of her mother Tong Zhiling, hwadan master, (considered to have been the foremost female performer of her generation), and entered the Shanghai School of Theater after Cultural Revolution, graduating in 1980. She performed frequently in Hong Kong, Taiwan and Shanghai. In 1984 she received great acclaim for her performance at Lincoln Center in New York City. In 1999 Tong Charlene was inducted into the People’s Wall of Fame at the Museum of the City of New York. She has continued to perform throughout the world: in Hong Kong, Taiwan, Shanghai and various Chinese cities; with Tan Dun and a full symphony orchestra in Belgium, Holland and Germany. She regularly performs in educational, cultural, and Chinese-American Community Centers and College Campuses and in various venues such as Carnegie Hall, Lincoln Center and etc. throughout the United States.
In the last 10 years Charlene Tong Shaw has concentrated on creating new productions and re-writing traditional productions. In 2001, she performed “Picking Up Jade Bracelet” in New York, re-writing all the vocal parts and re-designed the body language movements; in 2003, she created “Empress Yang Yu Huan” (in New York), by putting 3 different time plots: present, near past and far past in a one and a half hour performance. In 20056, she performed “Farewell My Concubine” (in Washington DC and New York), as Lady Yu, a victim of love and war.
She is the past president of the Institute of Chinese Opera (established in 1963) from 2003-2005 and the founder and president of Tong Xiao Ling Chinese Opera Ensemble of New York (founded in 2005). She will then be performing in a festival commemorating her mother’s accomplishments in Shanghai, China. She has successfully balanced and continued her other career as a fashion designer with her quest to preserve and advance this Chinese art form, Chinese Opera, which her family has been instrumental in for generations.