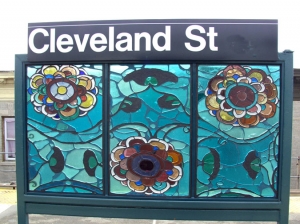 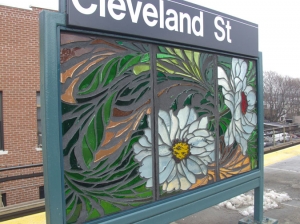 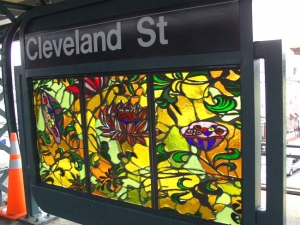 Amy Cheng was born in Taiwan, raised in Brazil, Oklahoma and Texas. She received a BFA degree from the University of Texas at Austin, and an MFA degree from Hunter College, City University of New York. She has installed a number of public art commissions including a mosaic column for the Seattle-Tacoma International Airport, a painted ceramic mural for the Howard El Station in Chicago, IL and faceted glass windscreens for the Cleveland Street Subway Station in Brooklyn, New York. She has exhibited her paintings both nationally and internationally. In 2008 she received a Senior Lecture/Research Fulbright fellowship to Brazil. She has been awarded two New York Foundation for the Arts painting fellowships, and a travel grant to China from Arts International. She is a Professor in the Art Department at the State University of New York at New Paltz.

I identify my work with the long tradition of visual artists interested in notions of cosmology: the artistic lineage I follow is ancient, and has separate roots in the Far East, the Middle East, and the West.

In the East, the mandala, which dates from prehistory and continues as a living tradition to this day, is seen as a container of essence, and is understood to represent the different layers of the universe – the spiritual realm, life on earth, and the inner experience of sensing beings.

In the West the cosmological lineage can be traced to mystics such as Robert Fludd (1574-1637), the English physician, astrologer, cosmologist, and follower of Paracelsus, who made 60 intricate engravings; the Swiss healer Emma Kunz (1892-1962), considered an “outsider artist,” used a pendulum to create large-scale abstract drawings on graph paper; and the Swedish painter and mystic Hilma af Klint (1862-1944), now acknowledged as a pioneer of abstract painting, who worked on constructing a system of mystical thought.

Sumptuous, intricate, ornamented, my current paintings are richly referential – they call to mind a range of associations from mandalas, the cosmos, cells, lace, brocade and more. I align myself with the long tradition of geometric and floral ornamentation the Far Eastern, Middle Eastern, and European craftsmen have long employed. They did so with the implicit understanding that pattern and repetition, which are endemic in nature, are primal in their rhythmic connection to the human nervous system.

I believe that in intertwining pictorial language from three very different cultural and religious traditions I am, as my friend the artist Thomas Lyon Mills said, paintings worlds within worlds with the aim of revealing profound, contemplative, slow, truths.