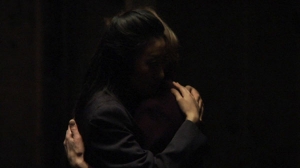 As President Obama confronts the legacies left by the previous administrations as well as deeply-rooted problems of race, class and ethnicity in American society, how will his unprecedented effort to promote pragmatic changes in the socio-political landscape effect the issue of identity in 21st Century America?

It was with this question in mind that the artist Ting Yih sought out Humberto Ramirez and Angel Velasco Shaw, two fellow artists, curators and educators, to collaborate in organizing a show titled Reconsidering Identity to be held at Gallery 456. Each curator would select one artist to represent a perspective on the question of identity in the era of Obama.

Humberto Ramirez invited artist Hong-An Truong to present her single channel video 'A Measure of Remorse’ from 2009. This video problematizes the intersection of personal, national and historical memories through a deconstruction of a broadcast that took place in 1998 during PBS' NewsHour between the author Iris Chang, the Japanese ambassador to the U.S. Kunihiko Saito, and the journalist Elizabeth Farnsworth. The session was devoted to an examination of war crimes committed by the Japanese against the Chinese during World War II.

Angel Velasco Shaw selected Filipino mixed media installation artist Perry Mamaril, whose work continues to be influenced by the two thousand year old northern Luzon indigenous culture that was unconquerable by the Spaniards and the Americans. The beautiful and bountiful nature in this mountainous region in the Philippines where Mamaril hails from inspires his sense of aesthetic and creative process. Shaw chose his work for its relevance in examining notions of post-colonial identity.

Ting Yih chose Alan Chow, a Taiwan-born, Beijing Opera performer, who is also the founder and director of the 456 Gallery. Yih wishes to address the idea that identity is actually more fluid and indeterminate than generally assumed. He selected Chow because of Chow’s talent in playing roles as varied as old lady to teenage boy to young lady. By considering how identity is understood in the theatrical world, Yih hopes to shed some light on how it can be reconsidered in the social.

The open collaboration between the curators produces an exhibit that showcases a rich variety of artists both in their ethnicity as well as in the methods and mediums of the work. In so doing they aim to re-address the difficult question that once was topical in the art world, but remains a pressing and polarizing issue in America.