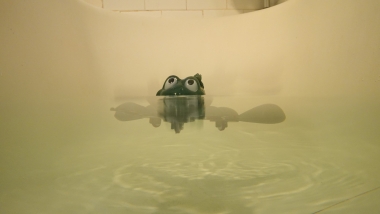 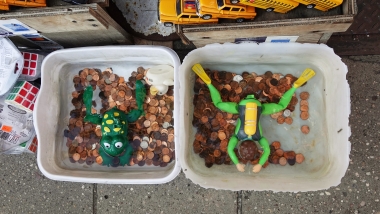 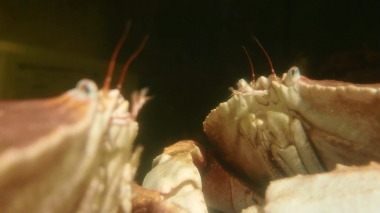 Over the past few years I have been making regular trips to Chinatown in New York. Among the familiar street scenes are something unfamiliar, which have drawn me into filming using simple devices to understand the often-neglected appearances.

“Jau Seoi” is a series of work composed of short close-up videos of fish tanks in Chinatown. “Jau Seoi” is the Cantonese term for swimming, which is also an adjective in describing live seafood kept in aquarium tanks at seafood restaurants or supermarkets. As the final dwelling for the “pre-food,” these tanks are dull and undecorated since entertainment is not the purpose. The purpose is to display how fresh and raw these inhabitants are, while only minimum survival needs are provided. Due to such limited space, the animals are forced into an unnatural state, and the concept of time in these glass rectangles seems to be out of order. I recorded these muted moments, edited and displayed them on small LCD panels.

Another series in the show, “Breaststroke- Retirement Plan,” is about the frog toys sold by gift shops in Chinatown. The toy frogs usually swim all day to attract customers’ attention. However, the frogs’ origin seems to be a mystery- no one knew the reason why they only appear in Chinatown. I filmed the last moments of the frogs swimming before I purchased and cleaned them up at home. In my bathtub, I re-filmed them in different angles and movements. At last, the frogs will be put in a round wash basin and swim in a ring. This is to pay tribute to the Japanese director Akira Kurosawa (1910-1998) and his last film Madadayo (1993), in which the protagonist wishes for a ring-shaped garden pond for the well-beings of his fish (1:05:25).

This series of work is to reflect the status of adaptability and survival in the face of certain environments. In the meantime, it often reminds me of the ones in immigrants societies who have to come to terms with the situation in the hope for an imagined, though obscured, future.