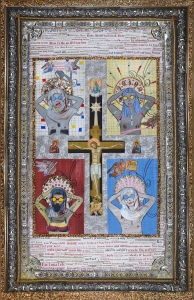 The Russian Icon can be traced back to 988 A.D. marking the transition when Kievan Rus’ (founded in 882 AD) converted to Orthodox Christianity. Painted on wooden supports, they depict saintly characters and holy scenarios. Their intent is ‘links’ between heaven and earth functioned as a protector bringing comfort to heart and soul.

As a student at Art School No.1 in Pavlodar, Kazakhstan, Oxana Kovalchuk (b.1979) was attracted to the myths and iconography contained in Russian religious annals she grew up with. However, today as New York based ex-pat since 2015, Kovalchuk will present her new body of work “Making Fools Pray To God”, metamorphosing Christian saints from her private arsenal into contemporary ‘deities’ venerated by the masses, people at large, under new guises. Availed of a Psychological aptitude (BA in Psychology, Omsk State University, Russia, 2001) and possessing sharp insights on the field of world economics (BA in Finance and Economy 2002), she sees that the spiritual ‘links’ today have an equivalent in the ‘realities’ provided us through iPhone, iPad, computer, or TV screens. We are surrounded by those audio-visual vicissitudes, unavoidable in our daily lives, our eyes and souls rest on them implacably for good or for bad. The place of saints was taken over by certain humans—idols and influencers have become the icons of popular culture, icons of excelsior opinion, icons of success. Perhaps a bit unwisely, obsessed believers continue making their thoughts public through their use of ‘confessional’ social mores, attracting people into their own specific sacrosanct ‘personal-cultural’. Such idols may be good or bad as it may. Ironically, a Russian proverb states, “If you make a fool to pray to God, he will roll his own head” meaning zeal without knowledge is a runaway horse.

Kovalchuk’s artistic creativity is deeply influenced by elements discovered in her experience raising three young, beloved children. She worries about their immersive exposure to the innumerable positives as well as nefarious new ‘icons’ floating un-endlessly through their screens day in and day out. In her exploration of various social media, Youtube and traditional television channels, she witnesses an array of famous characters ‘at work’, be it tech entrepreneurs such as Bill Gates, Jeff Bezos, and Mark Zuckerberg or musicians ranging from Rihanna to Lady Gaga, Ariana Grande and Billie Ellish, as well as colorful TV celebrities Kim Kardashian, Oprah Winfrey, Ellen DeGeneres and Jimmy Kimmel. Such mixed bag of characters’ social diatribes and chit chat that fuels public/private life in this populist America, Kovalchuk produces her own abstracted icon-collages made out of layered images on independent glass panels to produce a sensation of time and space, imagery culled from those new ‘pontifical’ sources arresting them for the viewer inside Light Box formats measuring 14 x 11 inches. In a larger set of three 48 x 28 inches, the artist presents us with mixed media collages inspired by traditional Russian icons in a Hagiographic Icons, also known as the Four-Part Icons style. The set contains, on the one hand today’s sacred icons/equivalents in ‘Healthy’ lifestyle, on the other hand, ‘Beauty’ arrives via the use of artificial, scientific procedures such as plastic surgery, topping it all off with visions portrayed in each icon panel reflective of all kinds of Covid-19 active social misconceptions. In these works, the artist is responding to today’s sensation of intense ‘fear’ due to the pandemic of Covid-19, it reeks of a repeat performance of behavioral aspects occurring in the dark Middle Ages with epidemics; echoing the fear of imminent death as portrayed in Ingmar Bergman’s 1957 film “The Seventh Seal”. Additionally, now that media and screens are everywhere in our lives, Kovalchuk says, “In our time, not only people create their own idols, but we can become idols ourselves easily,” which led her to create a 7.5 x 27 feet masterpiece with 10 saints, of which three of them “stepped out” of this painting, with their faces cut out.

While traditional icon artists were not allowed to leave a mark of authorship except on rare occasions, think of Andrei Rublev (1360-1430, canonized in 1988), illustriously portrayed in Andrei Tarkovsky’s 1966 film about the Saint’s life—these works being considered sacramental, Holy Tools—, Kovalchuk, against the grain of history will clearly attach her name to her entire production sanctifying each work as Fine Art. Furthermore, all her icon(ic) pieces will be combined in an installation meddling modern Goth with medieval aspects enveloped by velvet curtains, posing the viewer with questions of ‘Belief’, whether this world could safely contain both positive and negative/ harmful aspects.

The installation will be interactive with the viewers, exposed to an environment inspired by Christian cathedrals. First, with the mural size work, they are able to insert their faces through the holes of the life sized saints where their faces are cut out. This is to illustrate how they can experience being saints themselves. In the room divided by curtains, three church-style benches will be available for visitors to sit on and contemplate Kovalchuk’s modern day Holy Space provided, with a round table rigged with votive electric candles the public can use as offerings to the new Icon/personality.

Kyoko Sato is a Japanese independent curator based in New York City. She planned and materialized the exhibition “Ancient Queens and Goddesses: Treasures from the Metropolitan Museum of Art, New York” held at the Tokyo Metropolitan Museum and The Kobe City Museum, Japan in 2014. In 2017, she joined the roster of renown international curators at WhiteBox, the original Chelsea alternative non-profit art space, organizing a major historical exhibition, “EXODUS I, A Colossal World: Japanese Artists and New York, 1950s - Present” (2018) including 55 multifarious, significant artists ranging from Yayoi Kusama, Yoko Ono, Takashi Murakami to younger, emerging ex-pats. In the same year, Sato organized “Jizi: Journey of the Spirit” a traveling exhibition originating at the WAM museum of art, Minneapolis, creating a panel discussion moderated by Dr. Alexandra Munroe, Chief Curator at the Solomon R. Guggenheim Museum. In October 2018, WhiteBox assigned her as Director of Asian Programming. Subsequently she has curated and organized several key Asian art projects including a live and web streamed panel discussion on the last Aichi Trienniale's Censorship including its curators, present and past, moderated by eminent scholar Dr. Reiko Tomii. During the pandemic, she curated “Loy Luo: The Other I (The Me In Others)” in July 2020, showcasing portraits drawn by a Chinese woman’s street performance during the Stay Home Order in New York City. The most recent curatorial work “EXODUS V: Aesthetics in the Political” (Nov -Dec 2020) premiered seventeen succinct New York based Japanese expatriate women belonging to four generations. The exhibition received accolades from over sixty media outlets in NYC and abroad. For the upcoming 2022 season, she plans to curate and organize exhibitions and panel discussions focusing on women.

Sato has curated numerous shows with socially relevant themes including “Fermented Souls”, celebrating the 50th anniversary of normalized ties between Japan and Korea (2015, Waterfall gallery, supported by the UN Foundation), a photography exhibition “Lessons from Recovery: the Great East Japan Earthquake of 2011” (2016, the Nippon Club NY, supported by Reconstruction Agency, the Permanent Mission of Japan to the US, Consulate General of Japan in New York and the Japan Foundation). She also curated performance and video art exhibitions including Luca Veggetti's 'Fourth Characters' for Performa 19 at WhiteBox, 2019, Light Year 14: Japan Parade (Leo Kuelbs Collection, DUMBO Improvement District, 2016). Her curatorial Light Year 14 gathered a record number of viewers.

At present Sato is an art consultant to Crystal Foundation and Park, New York, and to tagboat.com, the largest online art gallery in Asia. She has been serving as an Ambassador and Juror at the Ronin-Globus Artist-in-Residence program since 2017. Previously she’s been a visiting critic to various educational and art programs including the MFA program at RISD (Rhode Island School of Design), Residency Unlimited and the NARS Foundation. She also has collaborated with the Fashion Institute of Technology organizing and moderating master fashion designer Hiroko Koshino’s lecture. Additionally she pens newspaper articles for art media.