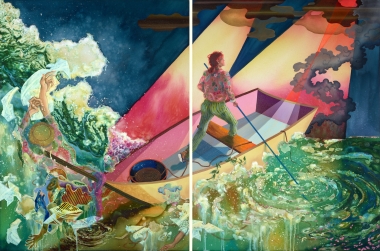 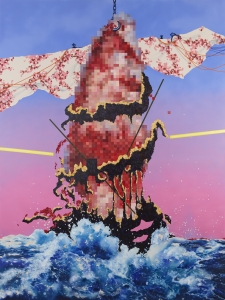 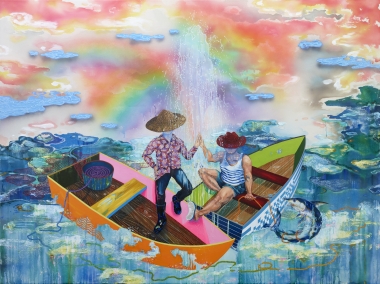 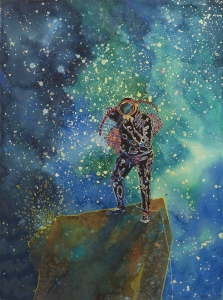 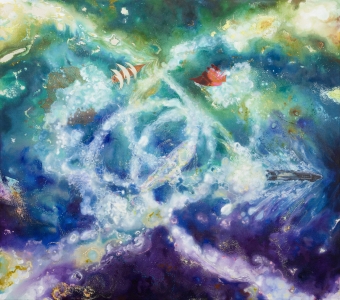 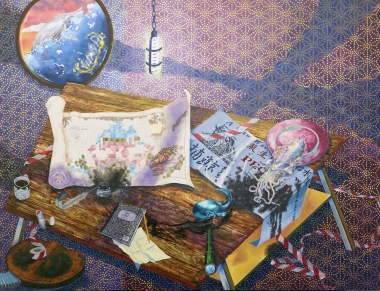 Gallery 456 is pleased to present Found in Translation, a selection of paintings and drawings from Eleen Lin's current body of work exploring themes of cultural hybrids and diasporas, memory, sexuality, and the inadequacies of translations between cultures and eras.

Inspired by Herman Melville's Moby-Dick, and mistranslations in the Mandarin version of the novel, Lin's stunning and often playful imagery hooks the viewer, taking them into complex contemporary worlds a dream’s width away from our own.

The images within the works are developed over many iterations via the source texts' links to current social/political issues; processes involving free association, wordplay, and slang; research of whaling and whale-related mythologies; and Lin's personal experiences as an immigrant artist.

Lin works with a mix of acrylic and oil medium on canvas. After staining raw canvas with acrylic to create a watercolor and Chinese ink painting-like backdrop, clear gesso and layers of transparent and opaque oil paints are applied to break into the fluidity of the background, giving it a collage-like effect. This effect simulates experiences of a digital world where multiple representations and images exist simultaneously or in rapid succession. However, Lin also leaves parts of the canvas raw, providing the viewer with a tether to the physically of the painting, and echos of maritime aesthetics (specifically sailcloth).

These physical and imagistic layers allow the viewer to become an audience discovering narratives within the paintings instead of simply being a spectator - even if they are not familiar with Moby-Dick. For those audience members who are familiar with the novel, multilingual, or have other connections to an Asian culture, there are many additional depths to discover.

Born in Taipei, Taiwan and raised in Thailand, Eleen Lin holds an MFA in Painting and Printmaking from Yale University School of Art (2008), and a BA from Slade School of Fine Art, UK (2005). Her work has been exhibited in a number of museums: Bronx Museum of Art, NY (2015); Queens Museum of Art, NY (2012); Guangdong Museum of Art, China (2007); Gwangju Museum of Art, Korea (2007), and others. She has had several solo exhibitions in the United States, Taiwan and Thailand, most recently at Craddock-Terry Gallery, VA (2016); Doris Ulmann Galleries, KY (2015); and Garrison Art Center, NY (2014). Lin’s work has also been featured in numerous group exhibitions throughout Austria, Germany, Taiwan, Thailand, the United Kingdom, and the United States. Her works are in the permanent collections of several institutions worldwide.

Lin has participated with NYFA Immigrant Artist Projects (2008, 2015, 2016), Fountainhead residency (2015), Rancho Linda Vista residency (2015), and the AIM program from the Bronx Museum of Art (2014). She won the Elizabeth Canfield Hicks Award (2008), and has received Sanyu Scholarships from the Andrea Frank Foundation.