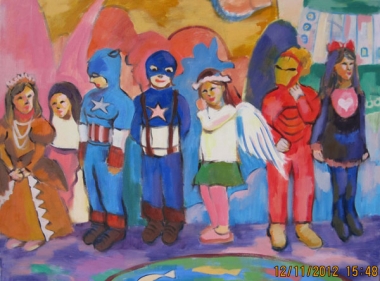 Born in 1972, Ying-ju Lai is a contemporary figurative Painter. Before 2002, her subject matter focused mainly on her family’s portraits. In the spring 2002, Ying-ju and her husband, Chi-Ying Hsieh had an opportunity to independent studied in a Manhattan studio in New York City. She started to extend her subject matter to include the people around her. Ying-ju’s aim for her work is to paint the inner reality, which forms the mystery of human existence. " Abstraction connects the visible and invisible," Ying-ju said. And she believes that the energy of invisible powerfully exits in her visible pictorial surface.

Ying-ju was born in Chang-Hwa, Taiwan, and currently resides in New York City. She gained her B.F.A. in Fine Art from the Chinese Culture University in Taipei, Taiwan and she gained her M.F.A. in Painting at the Savannah College of Art and Design in Georgia. After her M.F.A. study, now she is working in her studio in Manhattan as an full time artist. Ying-ju started to paint when she was only four years old, during that time, her major influences were her mother and grandmother. They allowed her to paint on a very large wall and they gave her the freedom to create whatever in her mind. Later, one of her professors in Taiwan, Read Lee, who is a modernist and an expert on Cézanne, and also her study of Chinese painting and calligraphy shaped her techniques, concept and style. Now, she is clarifying her thought through her current studies and research on contemporary art.
Because of Ying-ju’s faith in Christianity and love of people, she paints human figures with individual elements such as dogs, birds and fish. Those animal evoke certain emotion of human being. The theme of her paintings communicate the serenity and dignity of the human spirit which appears at different times and spaces in their lives.

Seeing her paintings, the brushstrokes are very free and the colors are very saturated. Many have tried to define her as a “ Fauvist”, but she denies being a part of this category. " The colors are just my personal favorite. It is my gift," she said.
Ying-ju has solo exhibitions and several group exhibitions in Taiwan since 1996. During 2001 to recent period, she also had solo exhibitions and several group shows in some major cities in America. And several paintings are in the public collection of the Savannah College of Art and Design. Also, she has private collectors in Taiwan, and Cities in the United States Such as California, Georgia as well as New York.