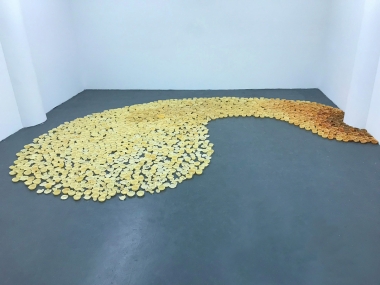 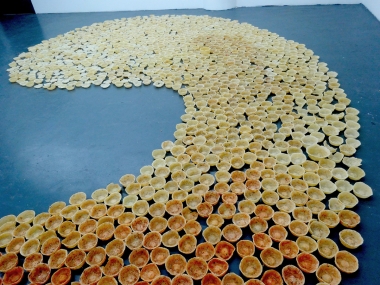 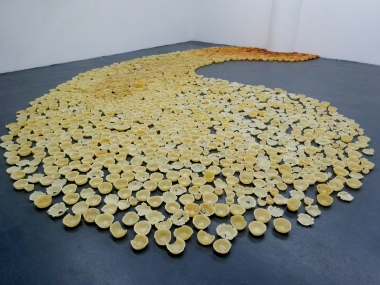 Artist Statement
In this new body of work, I explore a shifting landscape of consciousness, slipping between dream and reality, and evoking an unspoken concern. A dawning awareness pervades mind and body; it exists on the level of social dynamics; and assimilates aspects of the natural world as well as the global economy. Rice grains give way to hundreds of tiny pieces of rice paper; a single filament of this paper expands, little by little, and with the passage of time, transforms itself back into the macrocosm from which it came.

My experience with organic raw materials, such as rice, allows me to formulate patterns and motifs, making rhymes with the fragile web of nature. The resulting emotion-laden surfaces lay just beyond our reach; the extensive fields of rice seem to glow with their own inner light; yet each element takes the form of a single grain tentatively holding onto its place in its own peculiar realm. These "topographical" studies do not refer to a familiar place; nevertheless, they serve to convey unforeseen physical and psychological spaces. While working, I become intrigued by the history of thousands of types of rice grains. Each small being creates its own energy, and when it is transformed into collective shapes, the result is a startling visual poetry.

Bio
Born in South Korea. Hayoon Jay Lee obtained BFA in sculpture from Maryland Institute College of Art (MICA) in 2007 and a MFA degree from Rinehart School of Sculpture at the MICA in 2009.