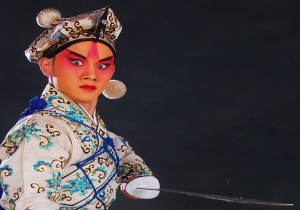 He majored in Opera when entered He Bei Vocational Art College in 2000. He is good at Wu Sheng，during the period of study in the college ，he was taught by some good teachers,such as Zhang Zhikui ,Wang Ruilou and Lou Jixing .He played ‘San Cha kou’‘Dang Ma’‘Da Nao Tian Gong’‘Liang jiang jun’‘Shi Ba Luo Han Dou Wu Kong’‘Wu Song Da Dian’and so on，which were praised by many teachers.He joined in He Bei Bang Zi Opera and took the tasks which are given by the He Bei Government. He played a key role in ‘ Bai Nian Yuan Meng’which is to celebrate Olympic Game, and he took a lot of activities when he visited Hong Kong and Macao. He took part in the activity，The start of Disney which held by relative sections of American. He once performed for the national leader such as Hu Jintao ,Jia Qinglin and so on at the Bei Jing Opera Ceremony in the Bei Jing Hall.

He got the Fourth Hong Sheng Bei Gold Medal，the Seventh ‘Xi Ju Bai Hua Jiang ’the first place，the Sixth ‘Ba Zhou Bei’Plum Blossom Gold Medal,the Fifth ‘Qian An Bei’siver medal,’the Third National Opera Performance ‘the second place,the Second He Bei Opera Competition the second place,the Third Singing Competition ‘the second.Through the practice on the stage ，he got improvement a lot on the experience and artistic level，he will cherish each chance to take the show ，in order that we are trying to promote opera to the world and the communication between china and other countries.